Establishing a quantum communication link over long distances is one of the major current challenges of quantum information technologies. For that purpose, encoding quantum information in photons (optical qubits) has the great advantage that light can propagate over significant distances, e.g., in free space or optical fibers, without interacting much with environmental perturbations, so that decoherence is a less stringent problem than for most material systems. The price to pay, however, is that photons are sensitive to line losses, which fundamentally limits the range over which a quantum communication link can be established. Considering for example today’s most developed application of quantum communication, namely quantum cryptography, losses and errors limit both the range and rate of the existing systems and have hindered the development of quantum wide area networks using this technology.

To date, two main strategies have been put forward in order to fight decoherence and losses in an optical link, thereby potentially enhancing its range. The first one, which has been extensively studied over the last ten years, both theoretically and experimentally, consists in developing a scheme that establishes entanglement between the two ends of the link. This leads to the concept of a “quantum repeater”, which relies on the combination of entanglement purification and entanglement swapping (an extended form of quantum teleportation). Roughly speaking, entanglement is first distributed and enhanced (purified) over small segments of the line, and then these segments are concatenated using entanglement swapping. A main drawback is that quantum memories need to be used for the overhead of this scheme to scale reasonably. This makes the concept of quantum repeaters quite demanding, although it is a very nice tool for theorists and a challenging goal for experimentalists. Although there is currently very active research on quantum memories and quantum repeaters, it is not expected that the first practical application thereof will be achieved in the short term.

A second solution to the intrinsic fragility of quantum information has also been known since the early times of the field, namely quantum error correction. This technique, inspired from classical error correction, differs from the quantum repeater in that the communication goes forward with some added “quantum redundancy”, and entanglement swapping plays no role. Just as several correlated bits are used to code a single bit in classical codes, thereby introducing redundancy, entangled qubits are used to code a qubit in their quantum counterpart. Although the two solutions are in theory equivalent (an entanglement purification protocol can be converted into a quantum error‐correcting code, and conversely), these are completely different philosophies from a practical point of view. Surprisingly, the second solution, namely using quantum coding to enhance the range of a quantum optical link, has not yet led to many experimental demonstrations. On the other hand, classical error‐correcting codes, such as “Cascade” or “LDPC”, have been used extensively in quantum key distribution devices and have proven to be very successful for range enhancement. Therefore, by combining and exploiting ideas coming from both classical and quantum coding theories, it is plausible that a very promising avenue is ahead of us, opening the way to both experimental and theoretical developments in quantum communications. This is the main thrust of the HIPERCOM project.

In this project, we focus on a particular modern approach to quantum communication that is based on coherent optical communication, using either homodyne or heterodyne detection. This approach, often referred to as “continuous‐variable quantum communication”, presents the key advantage that it is based on standard telecommunication components and circumvents the need for specific components such as single‐photon detectors. This directly results into much higher bandwidths or repetition rates by comparison with single‐photon (qubit) based schemes. The loss of photons in a communication line are, in this continuous‐variable approach, particularly damaging as attenuation necessarily comes with the injection of vacuum noise, which inevitably degrades the signal‐to‐noise ratio. It is thus of a prime importance to develop tools that may fight the loss and enable a long‐distance coherent quantum communication link. Our objective in this project is to explore classical and quantum coding as a tool to overcome line losses (or loss‐induced noise), both from a theoretical and experimental perspective. Our three workpackages address this problem by applying tools of increasing difficulty – but also with increasing promises.

Our first achievement so far has been a further improvement of our fiber‐based Continuous‐Variable Quantum Key Distribution (CV‐QKD) system in order to make it competitive on the market of information security. A major advancement in this direction was the significant extension in the communication range of CV‐QKD systems, which was achieved by a combination of an optimized optical setup and efficient error correction algorithms, which we have developed within the project. The work towards the upgrade of the experimental setup included the transition of the femtosecond laser to the picosecond regime in order to reduce dispersion effects. This allowed a reduction by a factor 2 of the added noise in the squeezed vacuum generated as a basic resource in the experiment by optical parametric amplification. On the theoretical side, we made a significant progress in the security proofs against general coherent attacks in CV‐QKD. Moreover, in order to test the practical security of our technology, we studied the impact of the deviations of the experimental implementation from theoretical models including finite‐size effect and considering side‐channel attacks.

We also developed a QKD system for free‐space communication, which is now operating successfully. We studied the atmospheric influence on the preservation of quantum properties of the communication channel. We were able to minimize successfully the main detrimental channel effects, which are loss and excess noise. Looking for better QKD protocols suitable for free‐space communication, we generalized the two‐way QKD protocol to thermal states and we have shown that it allows its application to longer wavelengths, and, in particular, to the challenging regime of the infrared spectrum, which is an important step towards the realization of a secure wireless quantum network. Furthermore, following the recently introduced notion of measurement‐device independence, continuous‐variable QKD have been then extended to a novel network formulation, which involves the use of untrusted relays.

On the side of quantum optical communication theory, we were able to consider a wide class of Gaussian error channels by introducing and analyzing the notion of approximate quantum error correction. Our analysis allowed us to conclude that non‐stabilizer codes are more efficient and effective for protecting a given quantum state against the Gaussian error channels such as losses or thermal noise. We also made several important steps towards the evaluation of the ultimate information capacity of Gaussian optical channels (partial solution using majorization theory, link with Gaussian discord, reduction to an equivalent fiducial channel).

Overall, we expect that the HIPERCOM project will have a real societal impact through the development of new communication and cryptographic security solutions, which play an ever‐increasing role in our modern information society. 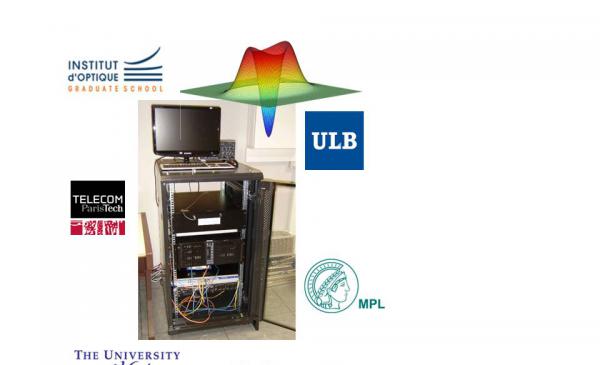